UMBC is a mid-sized, public research university offering bachelor’s, master’s, and doctoral degrees.  UMBC combines the emphasis on teaching found at the best liberal arts colleges with the innovation of a research university, offering nationally recognized programs in the arts, sciences, engineering, technology, policy and the humanities.

The UMBC Chess Team competes in major intercollegiate chess tournaments such as the Pan-American Intercollegiate Team Chess Championship (held each January) and the President’s Cup (traditionally held in early April), in addition to several preparatory tournaments in between. 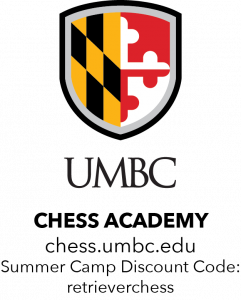 1.) Coaching Sessions — customized, one-on-one coaching sessions with one of our talented and experienced grandmasters or international masters.  Sign up for as many one-hour sessions as you’d like!

2.) Summer Camp — week long, half-day sessions designed to form a solid foundation upon which to grow and develop one’s knowledge and love for the game.