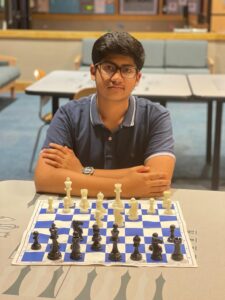 Dhanush comes to UMBC from Bangalore, India and is majoring in Computer Science.  He holds the title of FIDE Master, which he achieved a the age of 11 years old and has competed in tournaments across 16 countries during his career thus far.

He has won the bronze medal in the Commonwealth Chess Championship, a bronze medal in the under 9 Indian National Championship, and fished 5th at the 2014 World Youth Chess Championship held in Durban, South Africa.  Dhanush has won the best junior award in many international open tournaments, including the prestigious Biel Masters event held in Switzerland.  Additionally, Dhanush has received the Sports Excellence Award from the Indian Minister of Sport for his consistent performance at various national and international events.